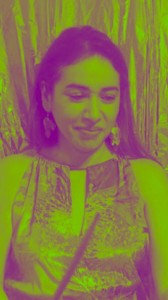 Art has always held an important place for Yola Minatchy; drawing since childwood in the seventies, painting in oils and making collages from the age of eleven, on her native Reunion Island.  A born artist with a life map and destiny written with a capital Y.

At 20 years old, Yola Minatchy leaves her Reunion Island to study at the Sorbonne in Paris. After a Phd in law, she works also as a lawyer, then moves to Brussels, writes, makes little films, “court-métrage” and photographs. If she used to transform her passion and energy into a creative force, she stays first of all a painter.

For example, her early work, a series of oils on canvas ‘The Tropical World’” present a  physical and metaphysical dialogue between elements of the natural world and memories of her childhood on the native island. Without doubt, these separations have sharpened her memories of these places. The connection between the act of painting and the process of memory become more prominent in this series.
Minatchy has explored, suspended, stretched her tropical world – a purification of the vegetal diluted  in  clouds of colour and light which belong only to  the south. This comes from her interesting ability to explore the medium, the colors,  the mouvement, the line.
Another earliest series, Roots, with bamboo and sugar cane, give évidence even of the ease to structure and to organize the medium in the space.
The series “Water” reveals certainly her concerns as for the problems and future of water on the planet.
The last series “The black box of the earth”, paintings of nature,  with numbers, letters and symbols invite us to decipher the codes… For Yola Minatchy, reality seems a combination of mathematics components to question, to research, and to paint the world surrounding us. This is an ambitious work that entails the creation of a sort of ideal pathway bring us together as we search for common meaning and understanding, leading  us into the Unity.
Beyond all poetic even philosophical contemplation, we ask whether the dynamism of creation begins with the mark on the canvas or with the idea. Because attentive to the planet, her work expresses also a reflection on certain social phenomenon. It consists of  so many strokes, initiatives, which are shifting the barriers towards a respect for Man and the Earth.

Yola is in the habit of working not only in situ on her native island of Reunion, but most of all in her Brussels studio, New York being her ‘ancrage modern art’.  Her art is influenced by her experience of living in different societies, her nomadic life style and her relations with others.
Her work reveals an art at once dense, poetic, inventive, talented, constructive and above all Beauty speaks. 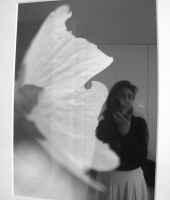 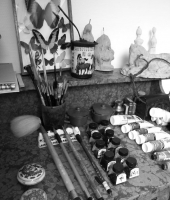 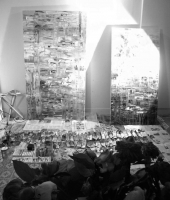 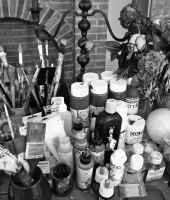 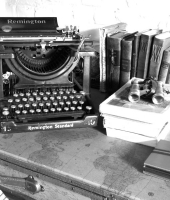 The work of Yola Minatchy

Yola Minatchy creates a tropical world in drawings, paintings and collages. Her works reference, or draw upon, her childhood memories of Réunion, the island where she lived until she was twenty.

The drawings rarely contain more than a fragment – as though the memories themselves are incomplete. Yet they speak to the viewer on several levels. In the first place, it is easy to simply get lost in the waves and rhythms of the pencil lines upon the paper. Their fragmentary character triggers a similar, carefree reality. Even so, no matter how inconclusive the form delineated by the pencil, her drawings often recall a recognisable image – such as the outlines of large, irregularly notched banana leaves. Although I cannot profess to ever having seen a banana leaf in its natural context, only in a large terracotta pot, this picture instantly evokes an entire world before my eyes. And since it is generally a single, isolated form on the sheet, I view these fragments rather like signs, or the letters of an alphabet I have yet to learn.

Every painting is a landscape. With their saturated colours and intense light, they coalesce into an abundant, unmistakably tropical world. Yola Minatchy lives and works in Brussels. Paris and New York are familiar surroundings. Yet the unwavering subject of her art is, nevertheless, the island of her youth. The island seems to function as a kind of Utopia in her oeuvre. A place created from memory. The rythmic way in which she applies the paint to the canvas carries both her, and us, through the waves of her longing, transporting us back, time and time again, to that sun-drenched, far-off island. But at the same time, she also deploys certain unmistakable elements in her work that throw both her, and us, off course. Our travels are slowed, sabotaged even. They can take the form, quite literally, of objects glued onto the picture surface. Their factual presence disrupts the work. The viewer is prevented from delving into the virtual space of the image and is cast back out into the concrete world of the here and now. Paradoxically enough, it is precisely this unruliness that ‘opens’ the work. If these paintings were straightforward attempts to lead us back to a sublimated past, they would ultimately depict a paradisiacal, but hermetic, world. But Minatchy’s art is searching – with a restless, passionate hunger that will never be sated with easily digestible solutions – for the very opposite: a path towards an unseen, other, potential world.

How is this possible? One answer might lie in Utopia (1512) by Thomas More. It is the archetypal tale of the early modern era. A time when the growing European impetus to turn the world into an object of scientific knowledge enabled men to navigate the seas and conquer vast corners of the globe. A shipwreck assumes a vital, pivotal role during the voyage to Utopia. In the fatal moment of the calamity, the measured world collapses, nature is no longer the object of our knowledge and power, and we become, in a stark reversal of fortune, the victims of her caprice, fury and benevolence. She is merciful enough to spare a life, and to cast it ashore upon an unknown island. The island is called Utopia, from the Greek ou-topos, which means ‘no-place’ or ‘nowhere’. It is the place of the fundamental ‘other’, the unthinkable and inconceivable, that which always escapes our grasp.

Utopia, the perfect island, is not part of this world. Réunion was not, and never will be, a Utopia. Let us not lose sight of the fact that the island remains a French colony. Between the centre of colonial power and the island there never has been, nor will be, a shipwreck. Contemporary modes of transport enable Yola Minatchy to reach Rénunion in record time, yet they are unable to bring her a single step closer to that which she observes.

The most powerful works of art always create the impression that they contain a degree of ‘autonomy’ or ‘freedom’, in the sense that they escape all forms of comprehension – not just that of viewer, but also the artist. It is precisely this elusiveness that lends such works their openness, the promise that everyone completes slightly differently. It also explains, likewise, why such works of art, which are inevitably born out of a powerful response to a specific context, ultimately transcend that context in their final form. It is within this tension – between the concrete and the universal – that the metaphorical vitality of the artwork, its utopian potential, resides.

Yola Minatchy’s oeuvre exudes a palpable sense of desire, an insatiable need to render emotions in paint. This gives the work a strong sense of purpose, an imperative energy. But at the same time, she harbours a constant fascination for the ‘black box’, and there are many incongruous elements within her work. There is no freedom and no mastery without a shipwreck: that key moment when the painter delivers himself and the artwork is born. That black box – stubborn and intangible in the centre of the picture – is also, remarkably enough, its beating heart.